I am a politically-involved young woman and I like to keep track of role-models who are women. There are men that I consider role-models, like Senator Cory Booker:

I like collecting women to look-up to, both because they are more likely to have had some of the same experiences I have and because I get joy from spreading the word: women are changing the world.

Each of the women profiled below currently holds, is seeking, or is supporting someone who is seeking, an office at the federal level. If you have a woman to add, please leave a comment with her name and why you think other readers should watch her rise and work for the people of our country.

I’m a bit biased here. I spent a few days in May at the California Democratic Party Convention and volunteered at AG Harris’s booth. I volunteered for her campaign because she brings the smart law enforcement experience (e.g. when she played hardball and got Californians billions more in subprime mortgage relief than they would have gotten otherwise) and a willingness to build coalitions.

Why she is a woman to watch: AG Harris is the current front-runner for the California U.S. Senate seat to replace retiring Senator Barbara Boxer.She would also be the first Indian-American woman in the U.S. Senate and the first African American Senator from California (her mother was born in India and her father in Jamaica). If elected, a possibility I am planning to work hard to achieve, she would bring a strong voice for survivors of trafficking and all Californians.

I first heard about AG Cortez Masto’s work when I was working at Polaris and our Policy Counsel was working to pass better anti-human trafficking laws in Nevada. She introduced an anti-trafficking bill, fought hard for it, and kept the pressure on in support of survivors.

Why she is a woman to watch: Nevada is a fascinating state preparing for political transition and AG Cortez Masto’s race is at the center of it. Moving from being represented by Sen. Harry Reid, who is one of the most powerful politicians in the U.S. as former Majority Leader in the Senate, to being represented by any Freshman Senator is going to be interesting. His seat is also one that could flip parties, thus changing the balance of the Senate. In addition to bringing strong law enforcement experience, she would also be one of, if not the, first Latina elected to the U.S. Senate.

Aside from being a notoriously aggressive basketball player, Renteria was the first Latina Chief-of-Staff in the history of the U.S. Senate and is expected to play a pivotal role in the upcoming campaign. She is working to connect labor, Latino groups, and Capitol Hill Democrats to the campaign.

Why she is a woman to watch: She holds one of the most powerful roles in the campaign of the current leading contender for the Presidency, she ran a hard Congressional campaign last round against an incumbent, and she is making a point of not only reaching out to groups representing people who need immigration changes–but actually speaking to the people themselves.

I got to meet Senator Murray briefly as part of a Washington DC trip with the Institute for a Democratic Future and hear her speak about her priorities around K-12 education. Senator Murray does not spend a lot of time on Sunday talk-shows, which is why few people outside of her home state know her name, but she is one of the top-five most powerful Democrats in the Senate and the most powerful woman.

Why she is a woman to watch: Senator Murray has used her power to work on big issues that touch a lot of people–education, veterans issues, and the budget. If Democrats regain control of the Senate in 2016 she will be positioned to make serious strides in those areas, helping people in Washington state and across the country. 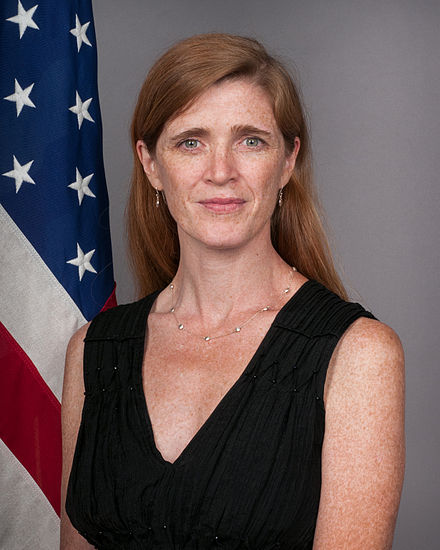 Ambassador Power is the youngest person ever confirmed to serve as the U.S. Ambassador to the United Nations. I think I first saw her speak as part of a White House Google Hangout on human trafficking in my first few months working in Washington DC, but I may have also read and admired her views on protecting civilians in conflict in college. Her name and her courage have stuck with me ever since.

Why she is a woman to watch: Ambassador Power has been a driving force behind the United States using force to prevent atrocities. She has been one of the most important voices behind the concept of a duty to intervene–the idea that the rent we pay for being the most powerful country in the world is to act when the people with the least power are being gassed to death by their own governments. The next time our country must decide how to respond in the face of an atrocity, she will be on the front-lines.

These five women serve their countries on a national scale. Some were elected, some appointed, and some work to get others elected. Each has found an issue that rings out to her in the key in which she works best–mortgage lending, human trafficking, labor, veterans affairs, civilian protection. And each is worth watching this year.

“It is easier to live through someone else than to complete yourself. The freedom to lead and plan your own life is frightening if you have never faced it before. It is frightening when a woman finally realizes that there is no answer to the question ‘who am I’ except the voice inside herself.”  ― Betty Friedan

Get in touch Cancel reply

Here’s the story behind my blog’s title. Words and opinions here are mine, all mine.